In an initially harmonious Annual General Meeting with many trophies and praise hymns, it was still really hot. And critical. In point 9 of the agenda, it came to the applications of members. Among them Michael Out, which has been significantly positioned for weeks against Qatar sponsoring at Bayern. On Thursday evening, the Bavaria fan then joined the lectern and presented his request.

Because the court had rejected an injunction against Bavaria, Out remained only the possibility of a spontaneous application that needed a 75 percent majority. But this spontaneous application smashed the Bureau, represented by Vice President Dr. Dieter Meyer, off. With the justification: I will not let us go here that we vote here on unlawful applications. The district court of Munich decided today that the general meeting is not responsible today.

In addition, the members present because of the pandemic only 780 (total more than 290,000) are not meaningful enough. You may like to attack in a legal proceeding that this application has not been admitted today, the Vice President threw behind. This was followed: whistles. BUH RES. People. Loud screaming. Again whistled. And BURRS. The hall raged.

After OTTO was rejected first request, he laid a second he had announced in advance. This time, OUT wanted a statutory change that states that the members must agree if the shares of the association at FC Bayern Munich AG fall below 75 percent (previously 70) so that investors do not get too much influence. 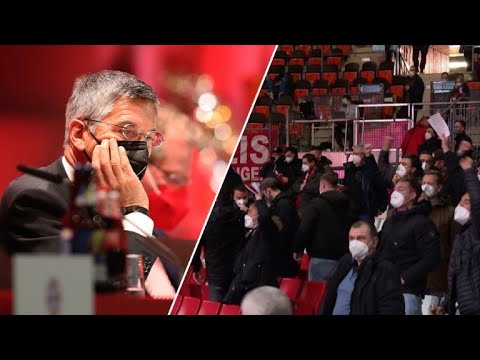 In view of the previously discontinued application regarding the Qatar theme, OUT was becoming more intelligent at his second request in his argumentation than for the association's goal-oriented. For especially in pandemic times, and that, the Bavaria bosses rightly said, are five percent room for maneuver — for any imbalance — possibly substantial. We need this opportunity, Oliver Khan, the CEO, to the plenary: There are no thoughts that we want to give this five percent. We are not looking for investors. And if, if something else is in question, the strategic Partners that bring the club.

A little later was tuned about it. A two-thirds majority, as she would have needed Out, he just did not get from the members present. What has his second application without success also remained? What the majority of members are still more emotional. Loud interim calls echoed through the Audi dome. Until the end. And the end was ingloriously — and one that will remain in memory of the FCB.

Member Sing: We are Bavaria — and not

President Herbert Gainer finished the assembly a bit abruptly, although further word messages were registered. The complete incomprehension of the members present, which would almost go to the barricades. They sang: We are Bavaria — and not. And: We are the fans you do not want. And last but not least, and that has never existed, called a large part of the members: Gainer out! Gainer out!

Honorary President UPI Honey, who was sitting in the first row this time, observed this Tohuwabohu visibly shocked. To the members he said, I have to sleep above. That was the worst event I have ever experienced at Bavaria.